For those of you who would rather wrap your headlights, taillights or reflectors in smoke Rtint light film or if you simply can't find a precut kit then you'll want to know how to go about doing it. That's why we asked Justin Pate of The Wrap Institute to create a video that covers the process from start to finish. As you'll see in the video below, your roll of bulk style, Rvinyl Light Tint Film comes in a sealed bag that you can cut alongside the roll of light tint to open. Inside the package is a straightforward installation guide. You will want to assemble the following tools before beginning: 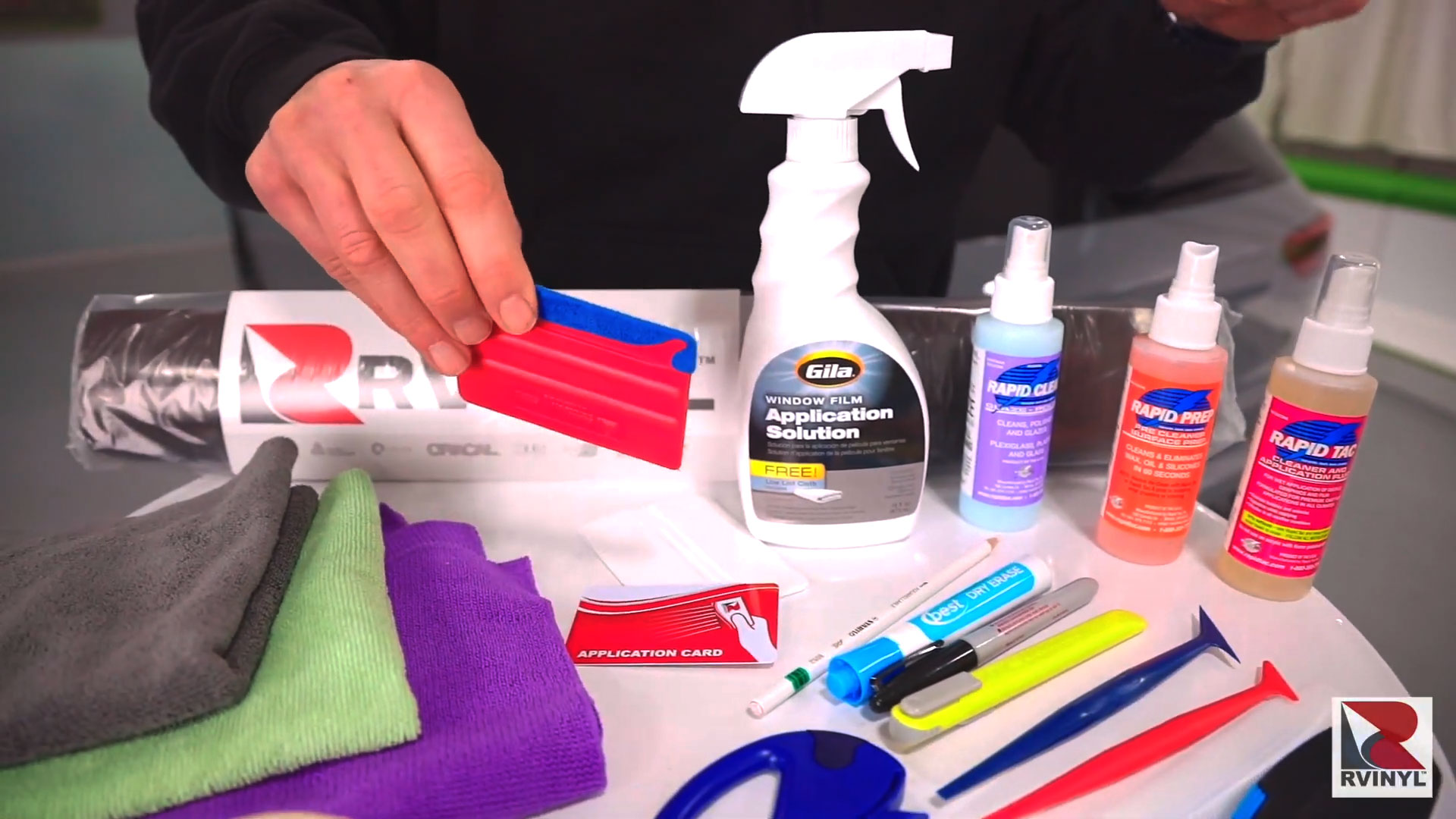 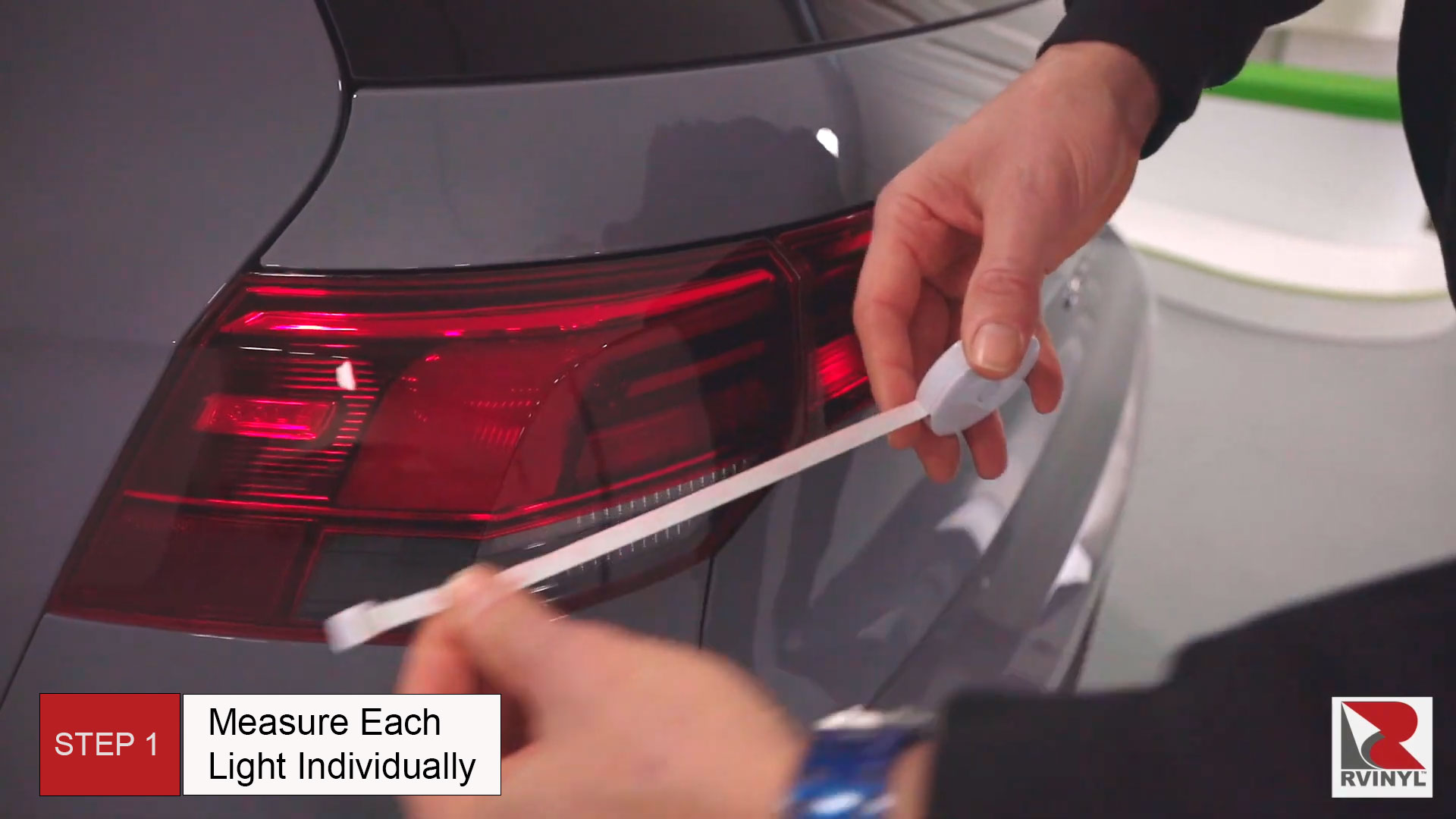 The first step is to measure the lights on the vehicle, measure each light separately and give around three inches of extra material on all sides, top, bottom left to right now on a clean table measure the sections on the liner marking the spots with dry erase marker and safely cut the light tint intersections using a Snitty. 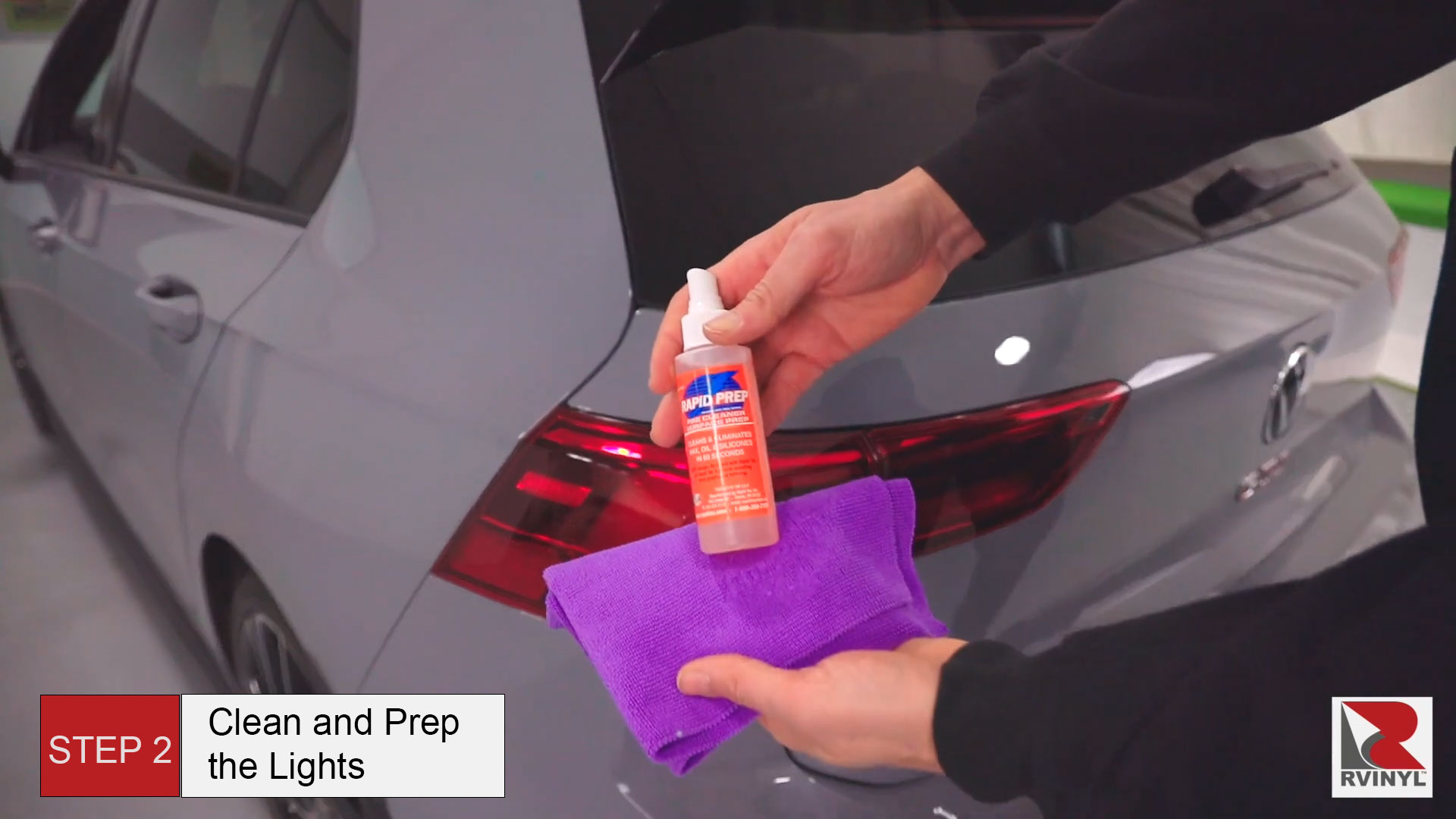 Next up is cleaning and use Rapid Prep. Spray the lights with even coverage, then wipe them down with a microfiber towel. Open the hood, trunk or hatchback when necessary and clean all the edges. This is critical for a long term hold tight gaps, a squeegee microfiber towel spray, then dig the corner in and go from side to side. If you're a beginner, a good tip is to test the cutting edges without any material on to get a good feel for the process.

DO NOT DO THIS:  Do not release the entire liner all at once and place the tint on the light. This leads to too many wrinkles. 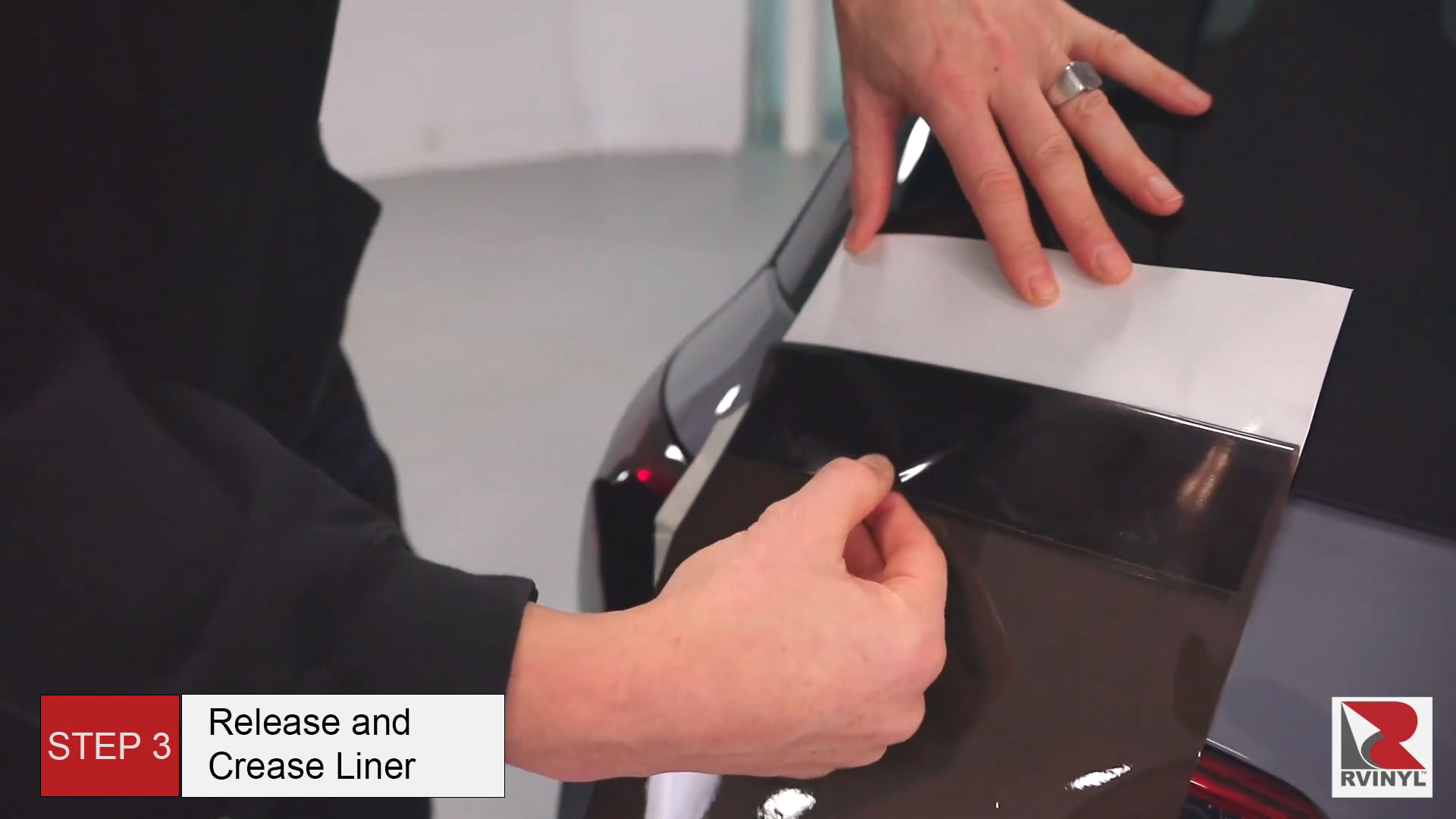 Here is one way on how to properly install it. Release a two inch section of the liner, fold it, being sure to crease it tightly. Place the Rvinyl light tint on one corner of the light, then holding it at a 45 degree angle, release the liner, heat it, then gently pull. Tack it to the body top and bottom, heat the film again to stretch it to the final edge. 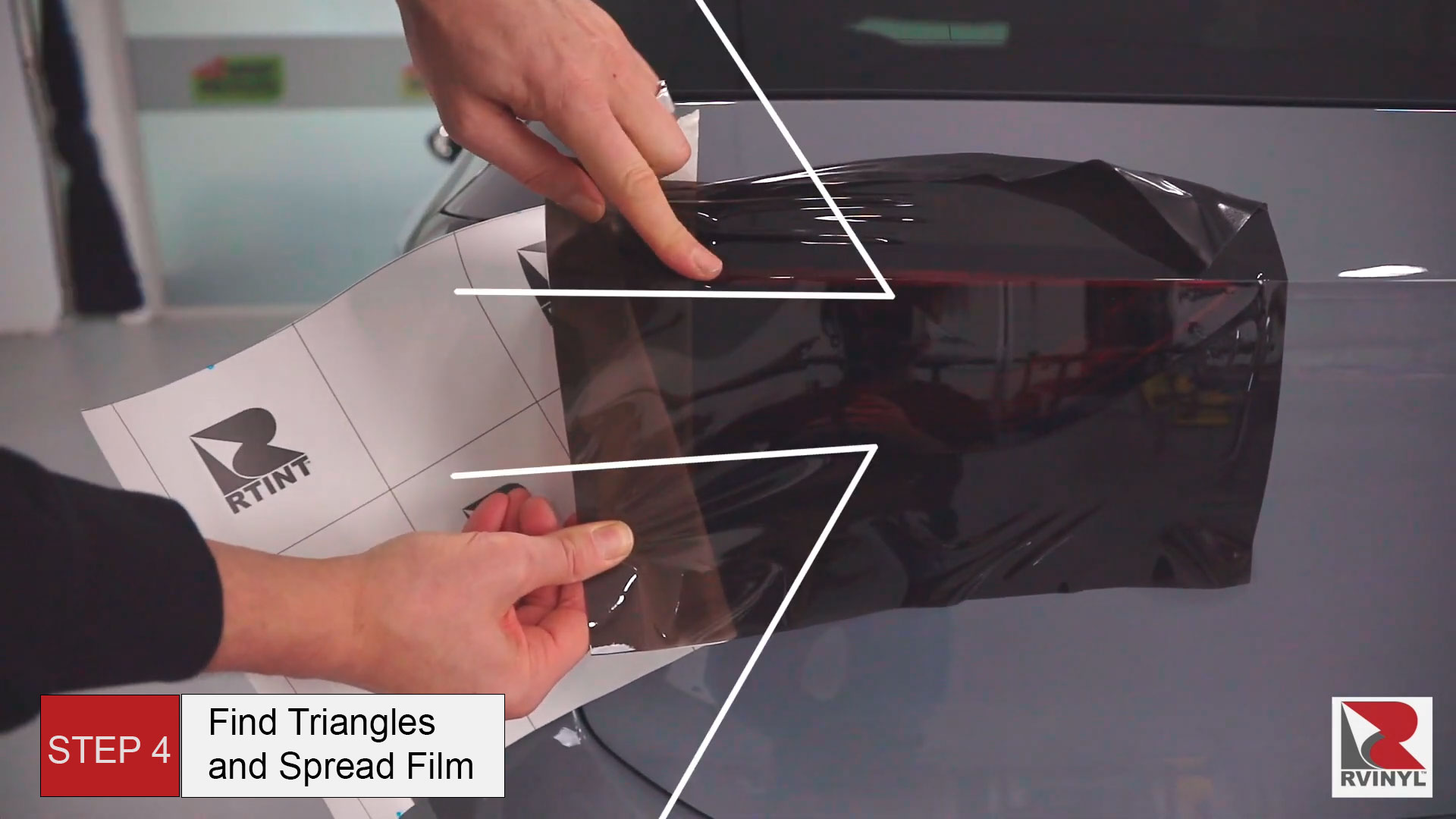 Now find two triangle shapes at the top and bottom as shown above. With two hands spread the tent out towards the bottom corner, then repeat the same towards the upper corner. Now, seal the edge and then with a squeegee, squeegee from side to side. If bubbles occur, one option is to simply press the bubble out. If this doesn't work, make a tiny hole, then press the air out. 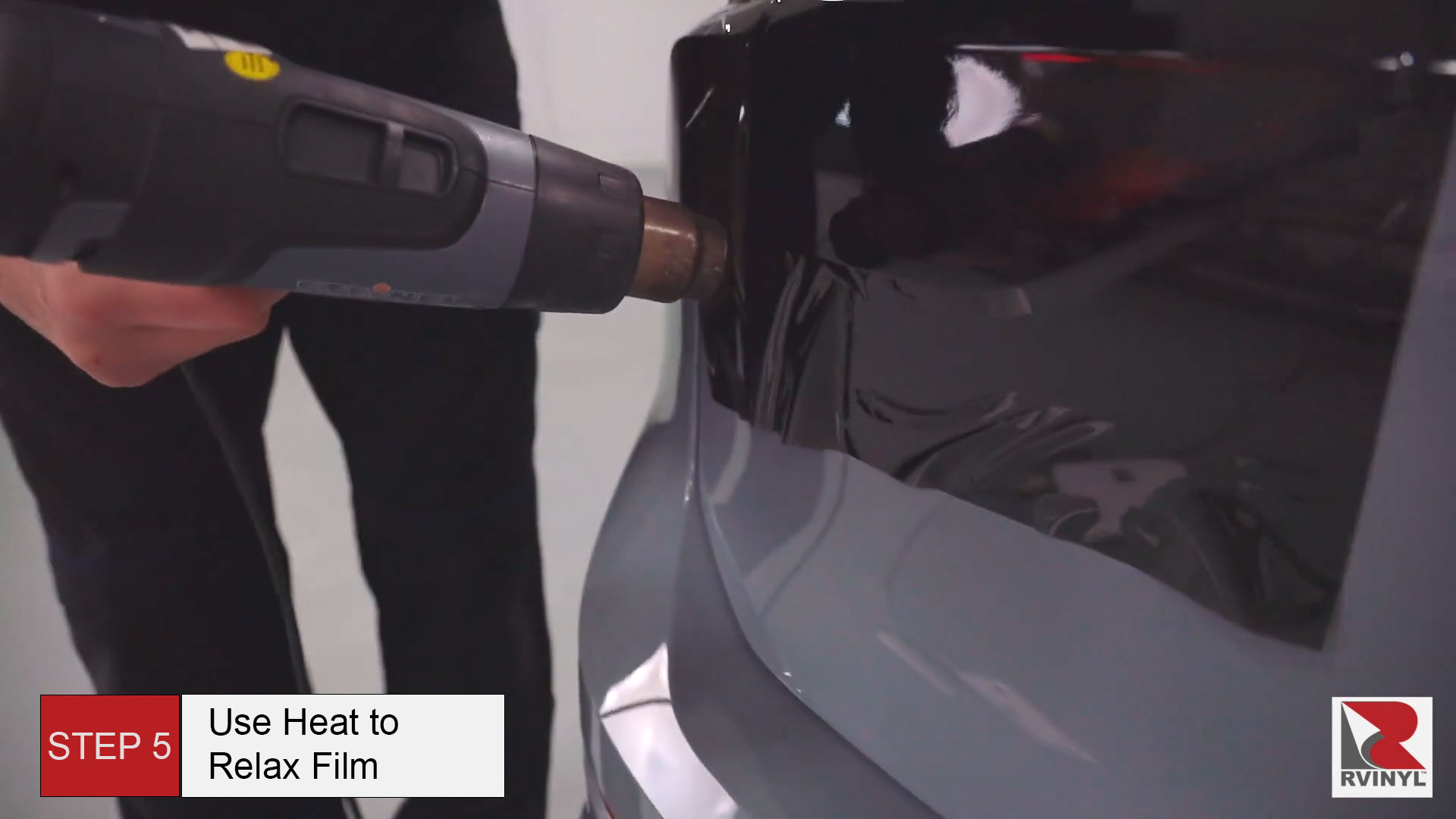 Step 5: Use Heat to Relax Film

Once all of the tint has been applied to the light, go over all the edges with heat to relax it, then with a sharp blade and a light touch cut around the light, always slow down on the corner to help ensure a nice even cut. And in many cases, the cut should be made on the opposite side to make sure there's enough light to go around the edge.

Heat the film to relax it, run a finger to round the material, then use a micro squeegee on the corner to get a proper seal without wrinkles, then finish the outside flat edges, running a finger and a micro squeegee.

If applicable, pick the excess piece off the side, lift the trunk or hatchback open, hit it with heat to relax, then seal the film to the edge before cutting it out. With the excess film removed over the light tint with heat to activate the adhesive. 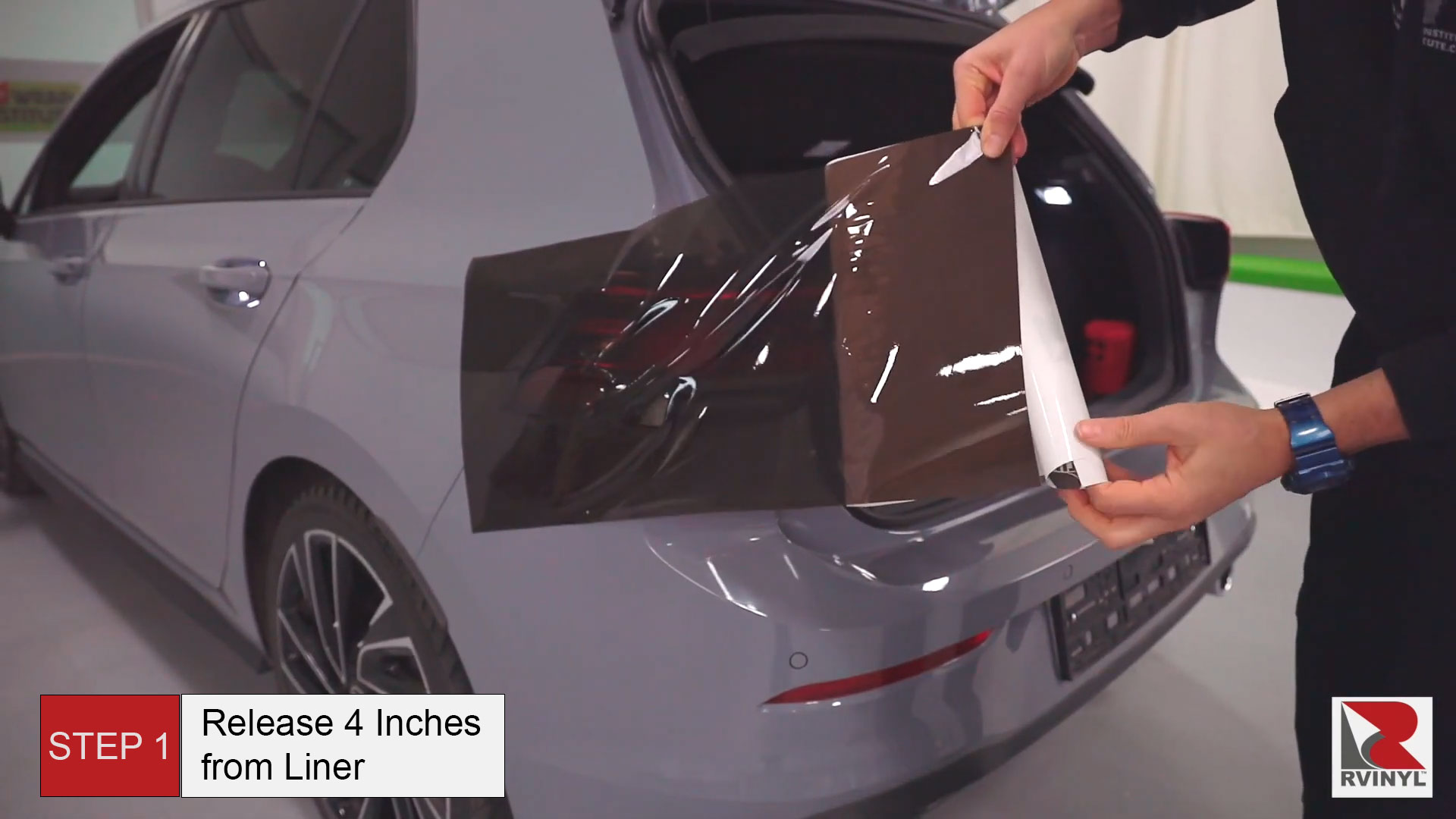 For lights with big curves released the liner about four inches and then apply it in the same way, anchor it to the corner. Then release the liner even more. If it is long roll it up and holding the liner and the film at the same time, heat it, then stretch it around the corner, the liner helps make even tension on top to bottom during this pull. 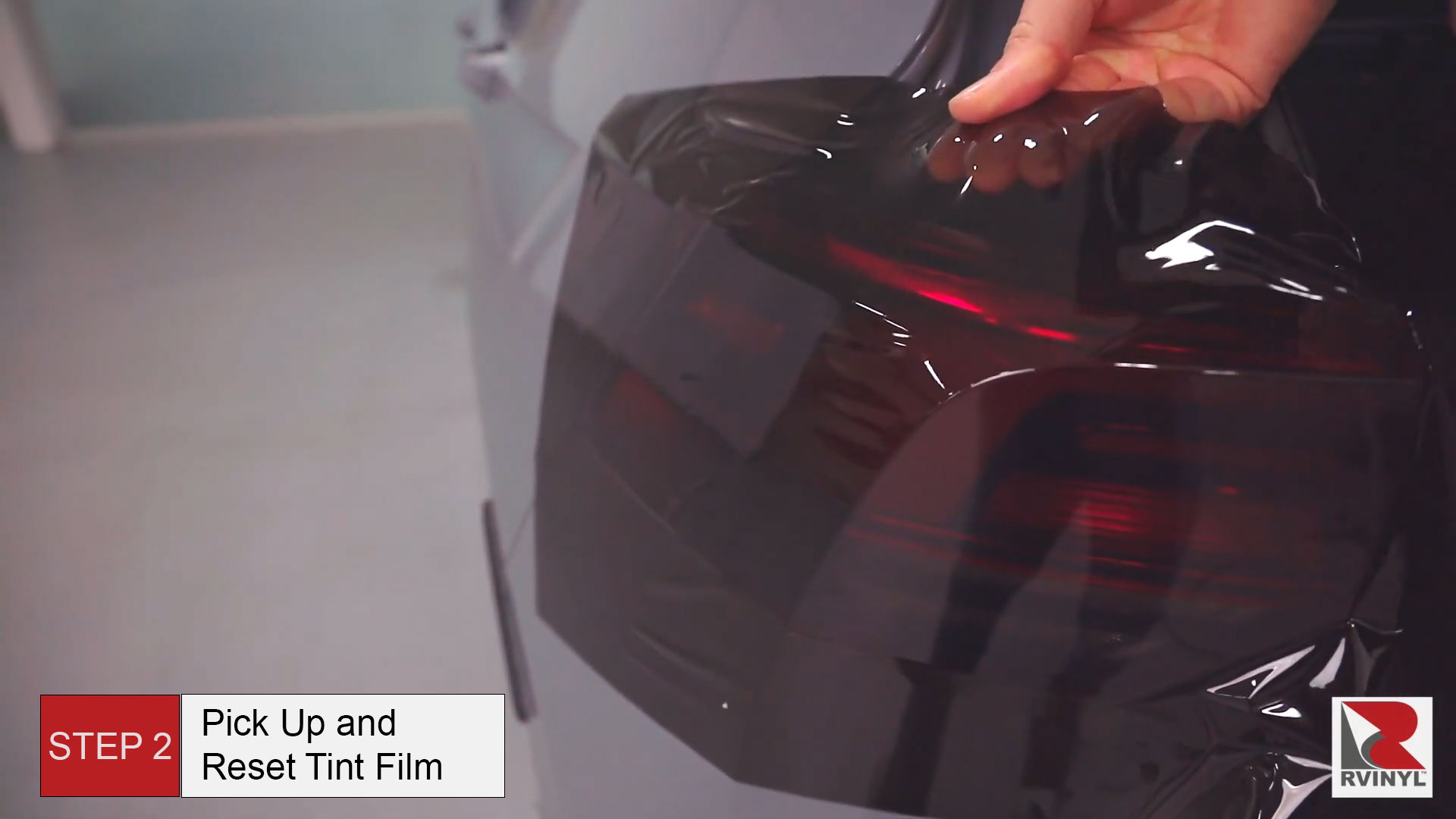 Step 2: Pick Up Film and Re-Set

On the middle section at the top, if needed, pick the film up just slightly from the surface and then let it sit evenly back towards the light, do the same for the corners. Once glassed out or there's no wrinkles at the top, simply squeegee from side to side. For the bottom, repeat the same steps in terms of picking the film up, letting it relax back to the surface, then squeegeeing the tint onto the light. The air-egress feature of the adhesive will allow the air to smoothly go out with almost zero bubbles. 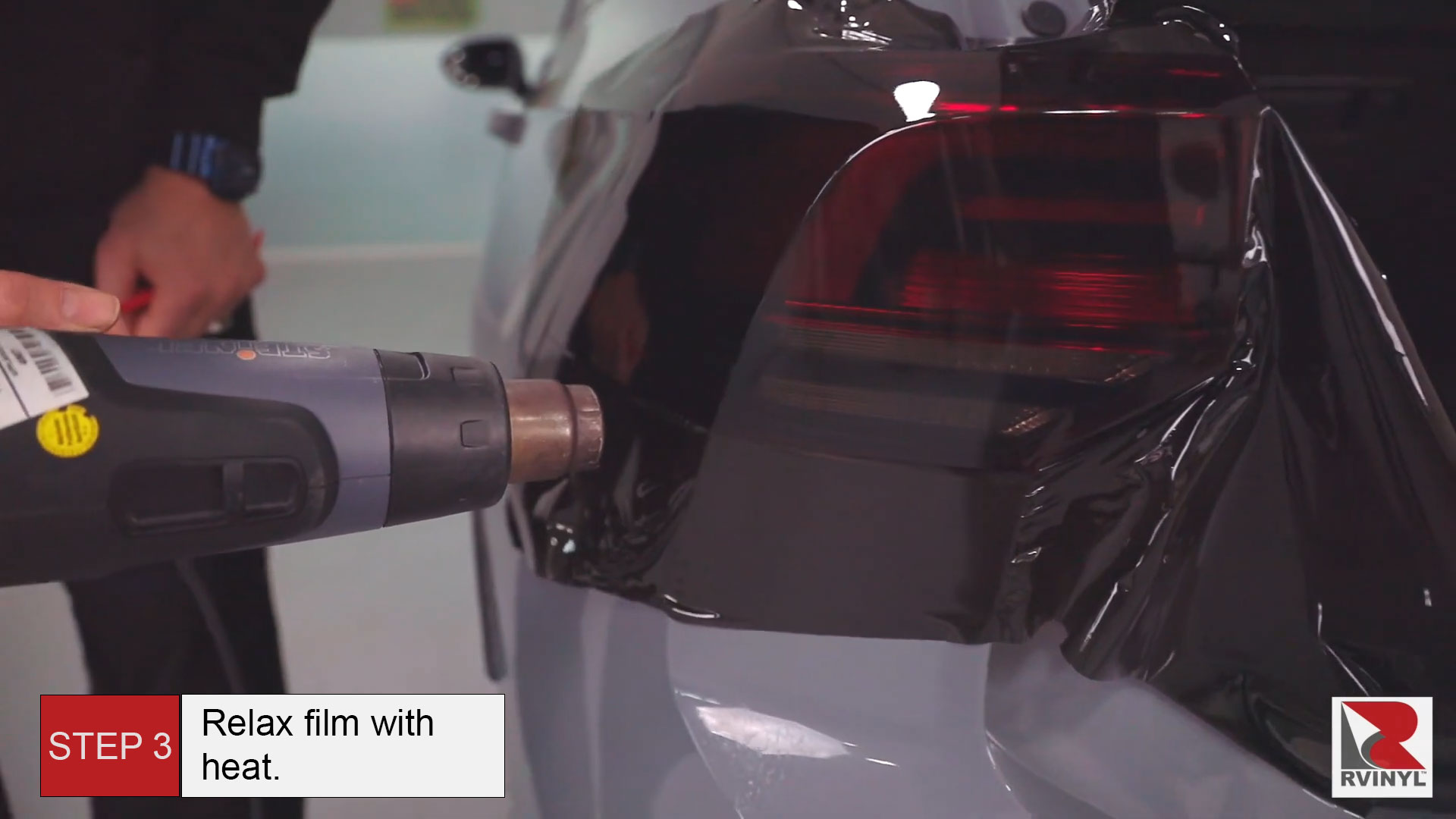 Once the tint is on, go over the all the edges with heat to relax the film. Once the edges are relaxed, using a safety box, click the blade so it's extra sharp and for tight gaps cut on the opposite side, then what's the cut is made, always be sure to squeegee the body lines and the corners first. Then squeegee the flat areas last.

On some edges, there's no opposite side to cut on, so the film needs to be picked up and talk to the edge, then cut away. In most cases, there should be a safe edge to run the blade along, which means no direct cuts on the light. 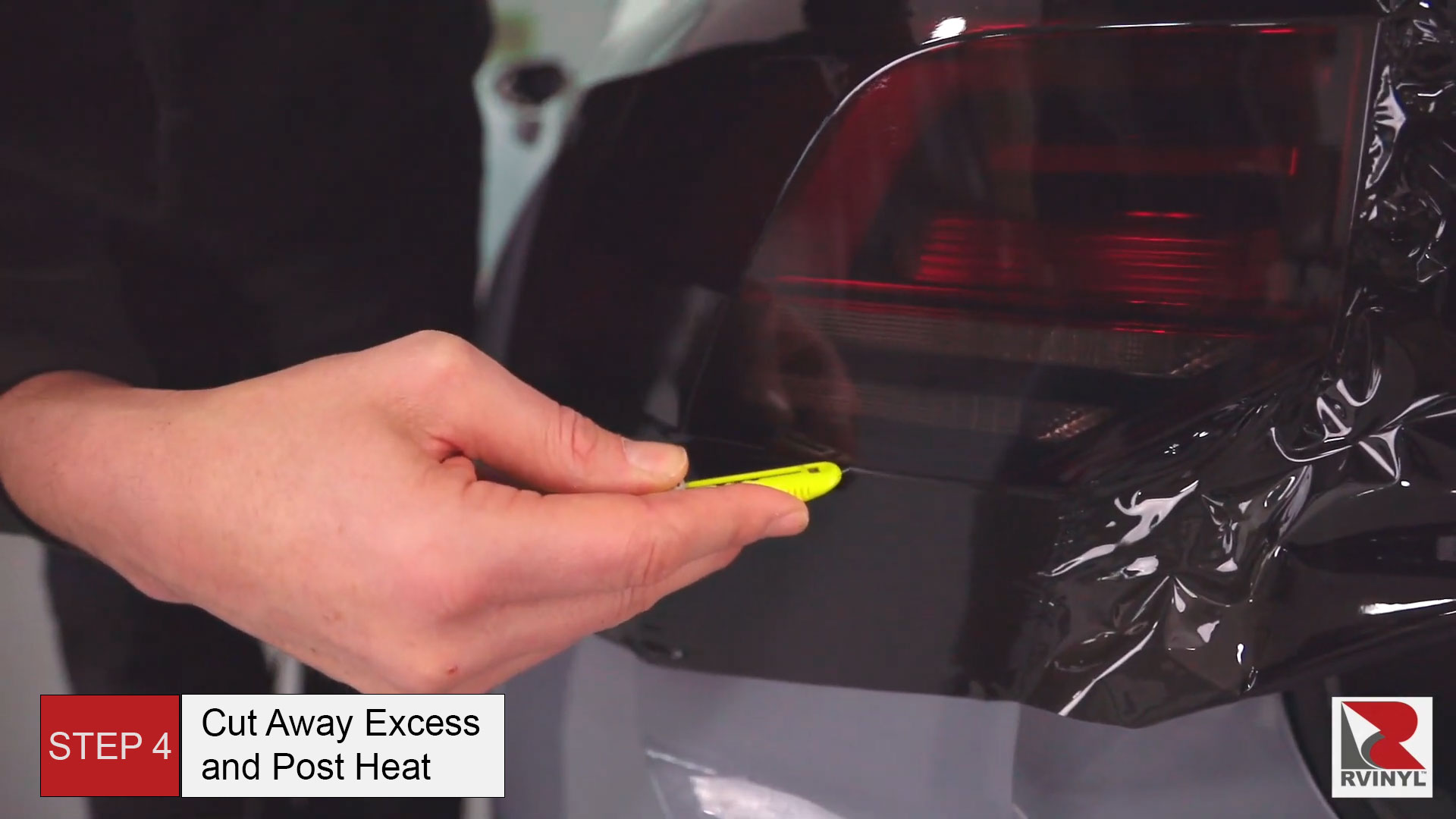 Step 4: Cut away and Relax Film with Heat

With everything cut away, go over all the edges with heat and go over the main surface area as well. Post heating is one of the most important parts of the process as it relaxes the film, cures it and brings any bubbles to the surface so they can be popped or worked out.

Installing Rtint on Your Reflectors 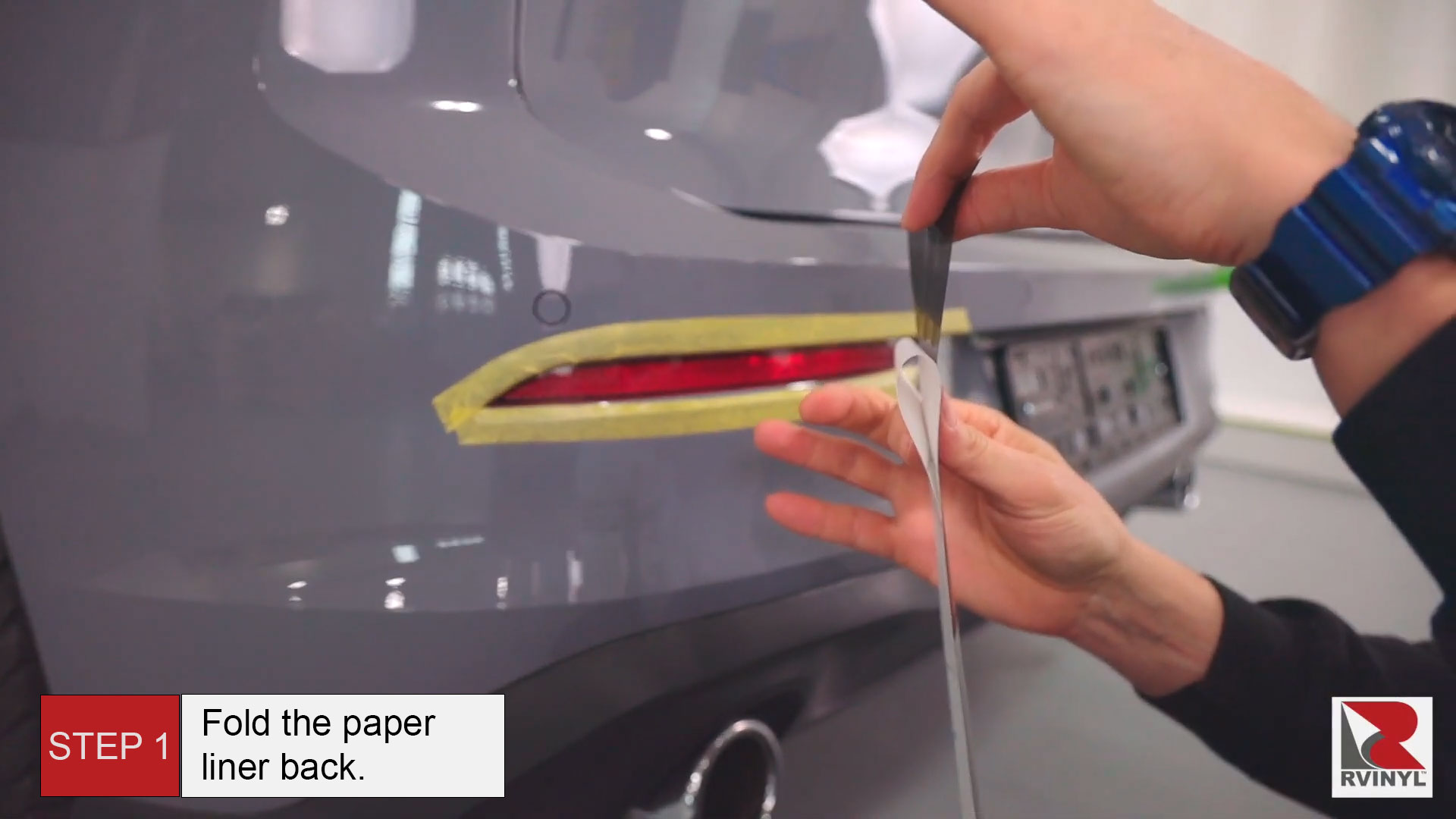 Step 1: Line Up Film to Straight Edge of Reflector 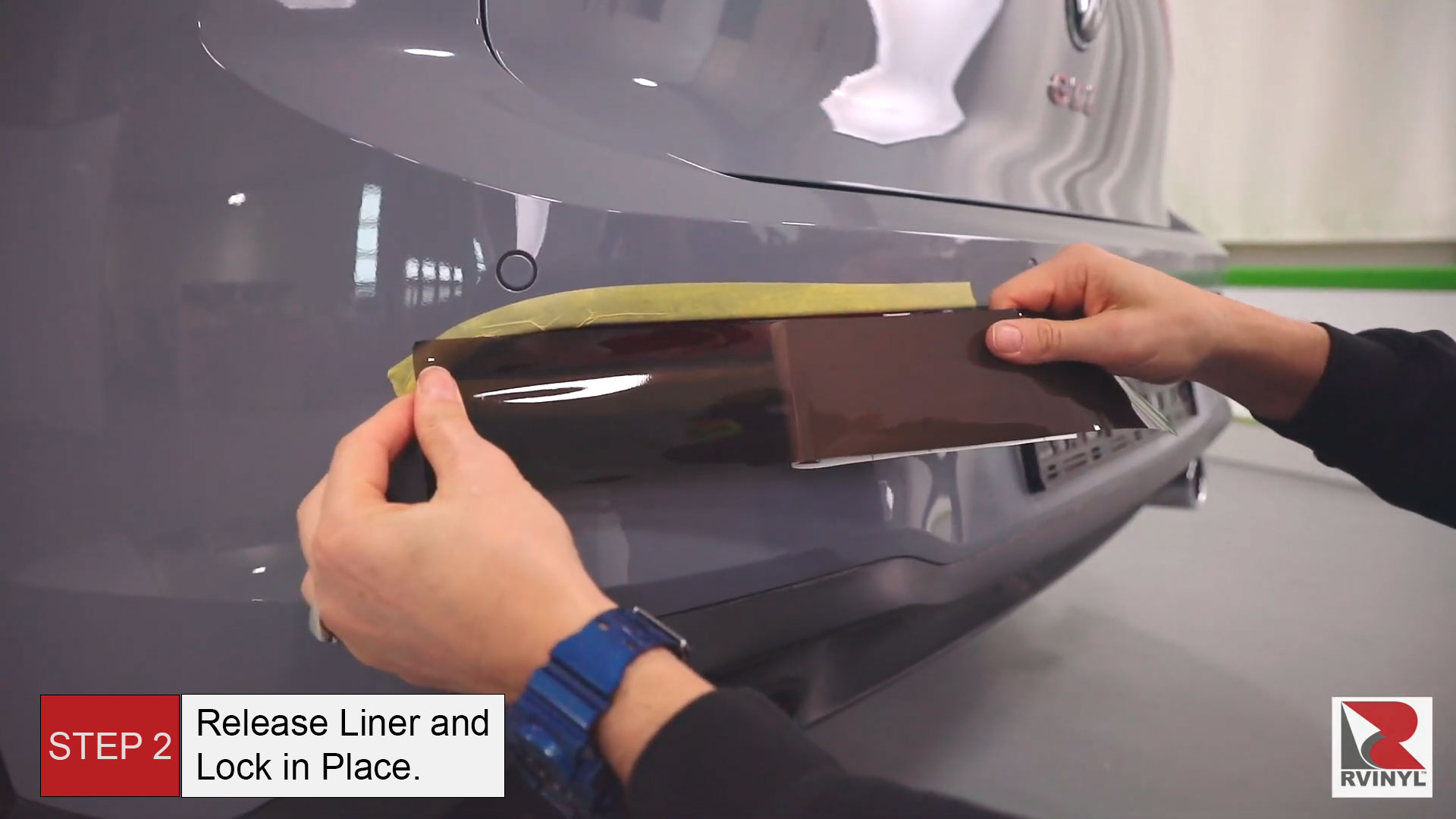 Release the entire liner and then stretch the tint all the way towards the other side, we're going to finger to lock in a place that sealed the edge with the hard side of the squeegee, then run a squeegee with the buffer side on the bottom. 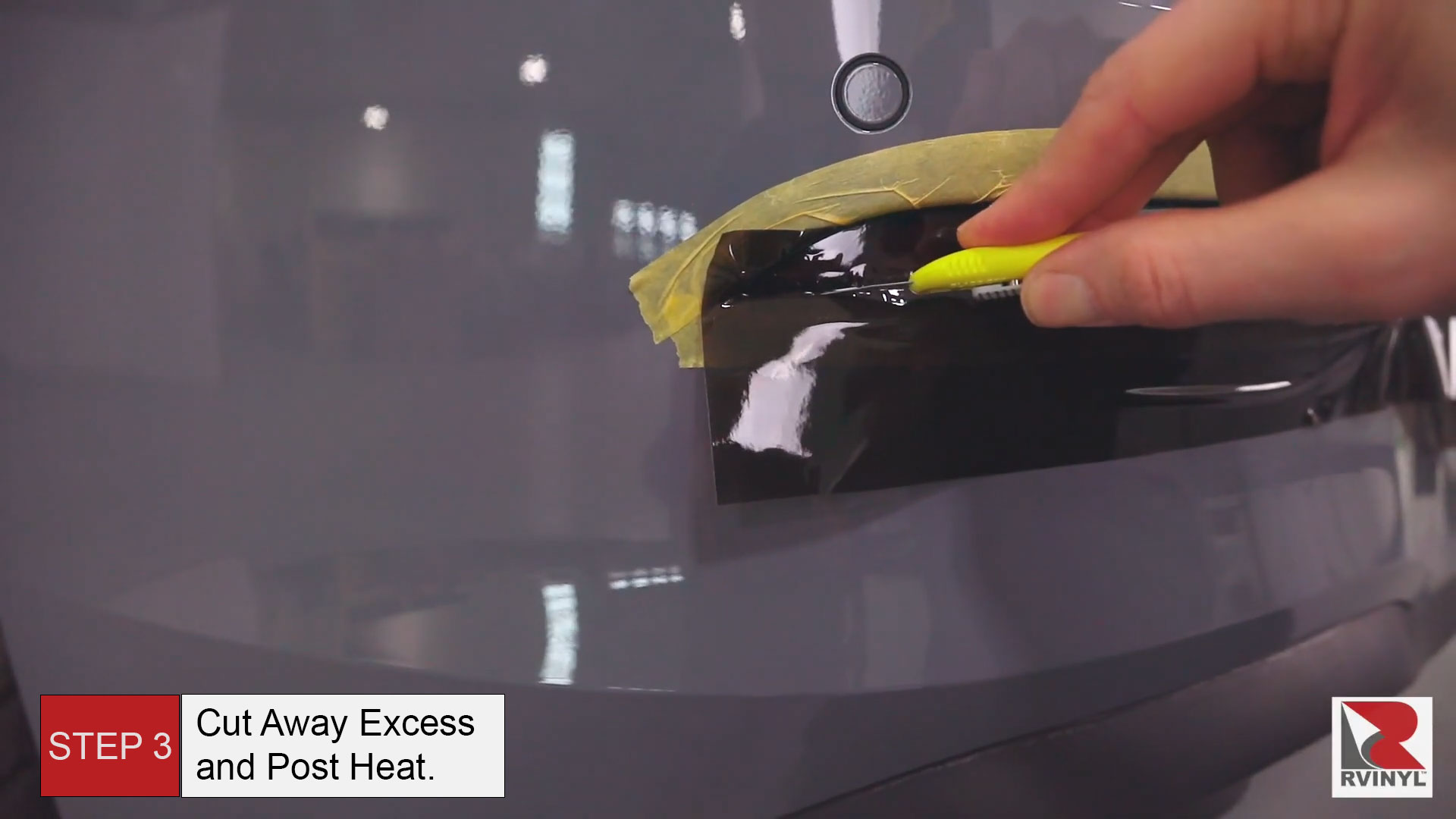 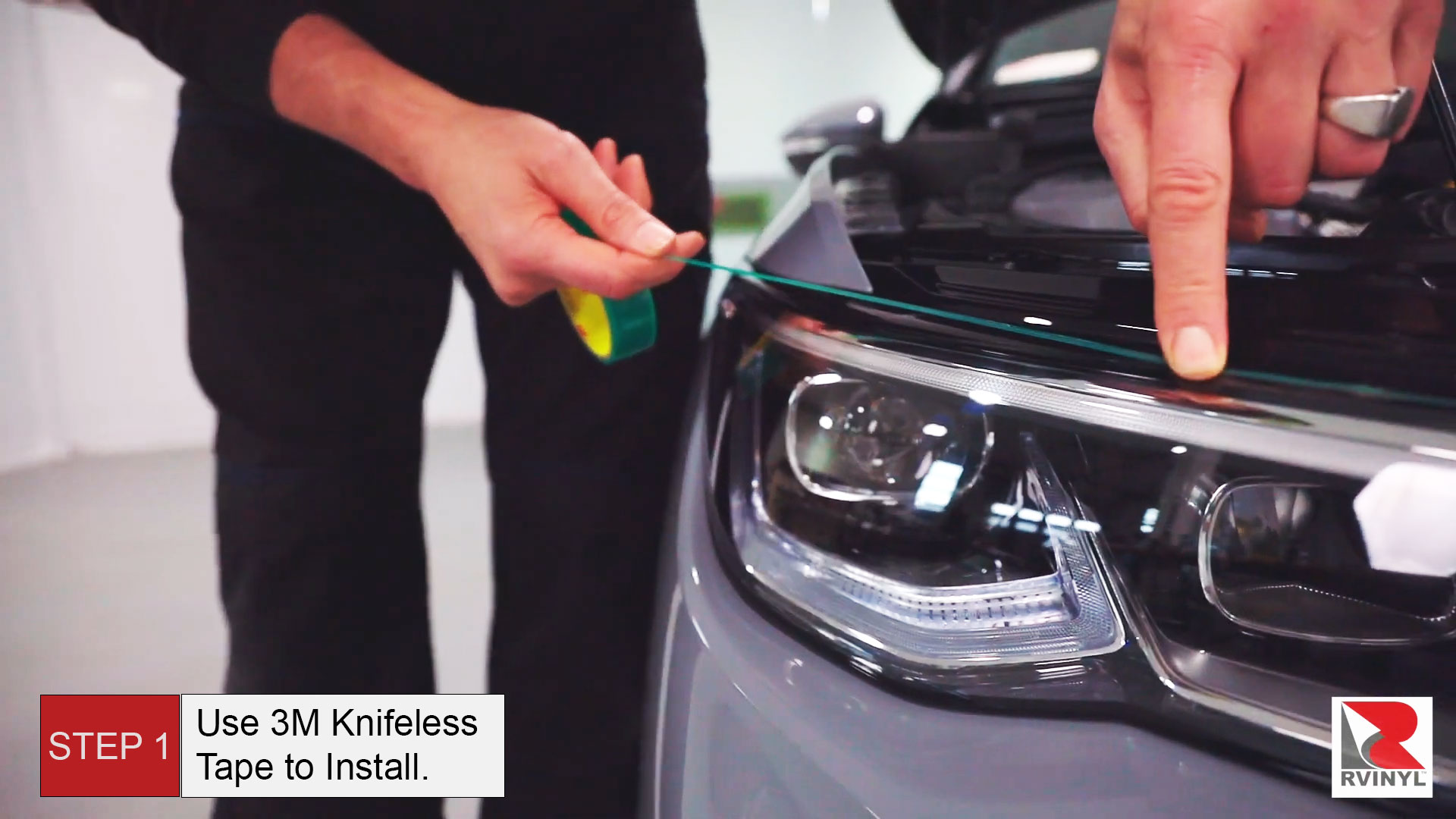 A final install tip for Rvinyl light tint, comes on headlights, which have areas where a direct cut is needed on the light. If this is the case, then use the 3M knifeless tape place to run on top of the light, which has a blackout section. 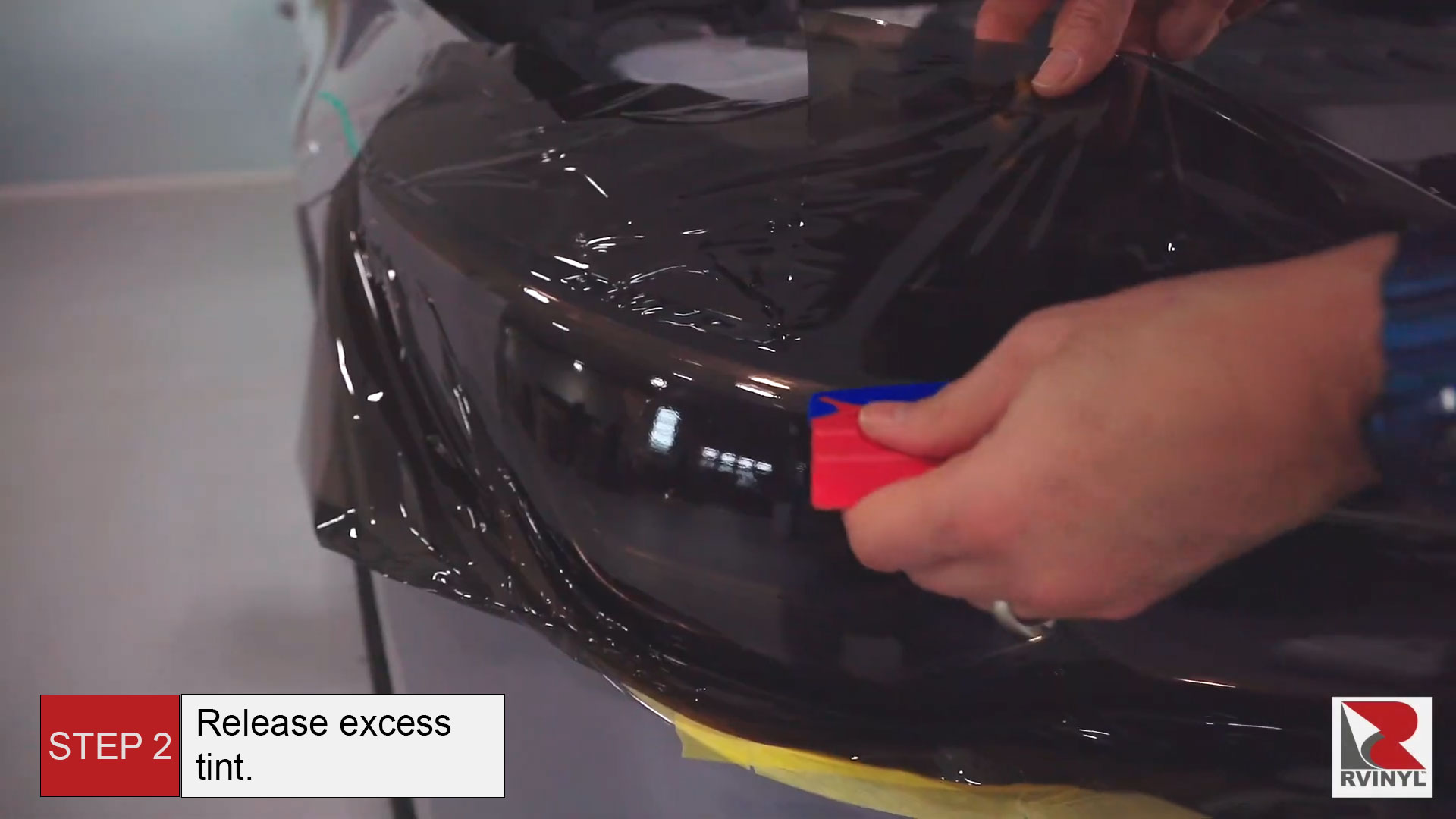 Then release the excess tint by pulling away from the light, then seal the deal with a squeegee stroke from side to side. The edge of the tint should be just about a quarter inch just onto the blackout section for full coverage. 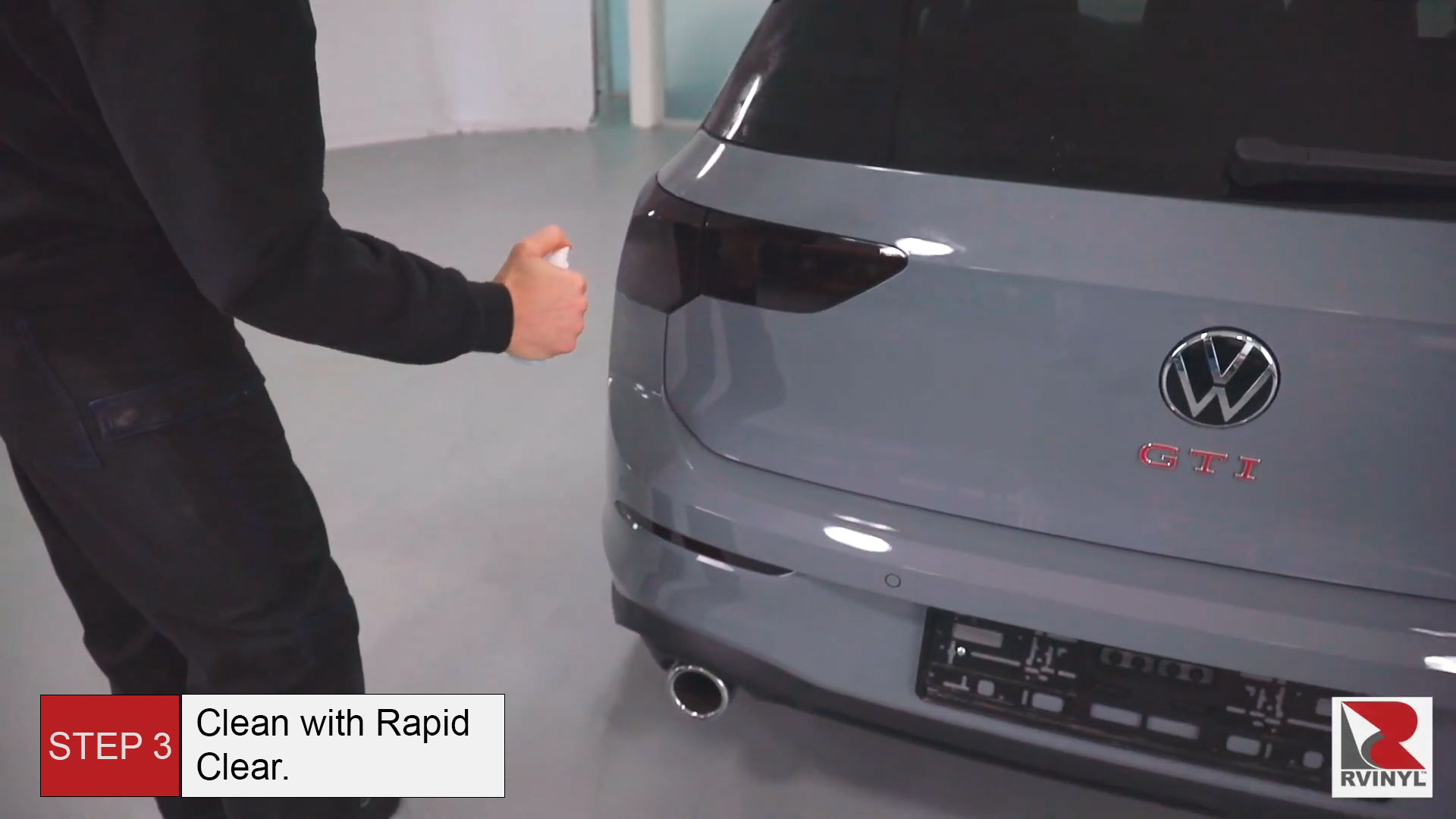 Once all the lights back and front and the reflectors are tinted, clean, the areas with Rapid Clear. This will put a nice finishing touch on the tint, as well as remove any hand prints. Keep in mind that if the Rvinyl tint ever has to be removed from the lights, simply add heat, pick up an edge, then pull it off.